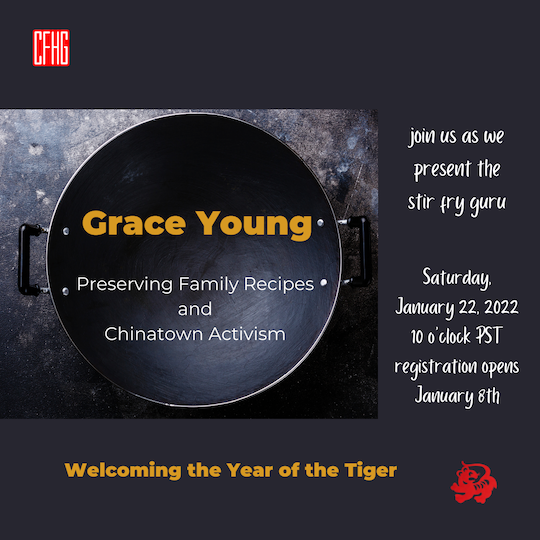 On October 23, 2021, Grace Young was named the recipient of the Lifetime Achievement Award from the International Association of Culinary Professionals because she has spent her career “in service to enrich the culinary world”.  Grace will share and demonstrate with us how her desire to document her parent’s traditional Cantonese dishes led to an award winning cookbook and her father’s wok becoming part of Chinese American culinary history housed at the Smithsonian National Museum of American History.  Grace’s dedication in preserving Chinese traditional recipes has grown into the preservation of Chinese small businesses which are part of America’s rich and diverse heritage.

Grace Young is a James Beard award-winning cookbook author, culinary historian, and filmmaker. She has been a fierce advocate for Chinatown, never more so than in her video series Coronavirus: Chinatown Stories, which documents the toll of the pandemic on NYC’s Chinese community. After the success of their #SaveChineseRestaurants campaign she is partnering once again with the James Beard Foundation and Poster House museum on a #LoveAAPI Instagram campaign to fight anti-Asian hate. Dubbed the “accidental voice for Chinatown” by Grub Street, Grace’s advocacy for Chinese mom and pop businesses has been written about in Smithsonian , Vogue, and Food & Wine magazine. Her family’s wok circa 1949, which was part of the Museum of Food & Drink’s Chow exhibit.