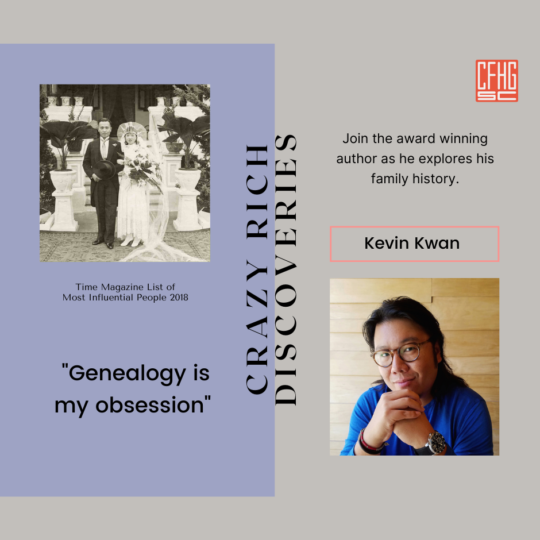 Kevin Kwan shared intimate stories and photos about his family tree ranging back to the year 946. Born in Singapore into a sprawling family tree that would later inspire his “Crazy Rich Asians” trilogy, Kwan found his world upended when his parents moved to Houston, Texas when he was 11. Although he spent his formative years in America, Kevin has discovered his family roots, which dive deep into China.

Kevin Kwan is the author of Crazy Rich Asians, the international bestselling novel that has been translated into more than 40 languages. Its sequel, China Rich Girlfriend, was released in 2015, and Rich People Problems, the final book in the trilogy, followed in 2017. For several weeks in 2018, the Crazy Rich Asians trilogy commanded the top three positions of the New York Times bestseller list – an almost unprecedented single-author trifecta, and the film adaptation of Crazy Rich Asians became Hollywood’s highest grossing romantic comedy in over a decade. In 2018, Kevin was named by Time Magazine as one of the 100 Most Influential People in the World. His newest novel “Sex and Vanity” is a New York Times bestseller and is being adapted into a film by Sony Pictures.